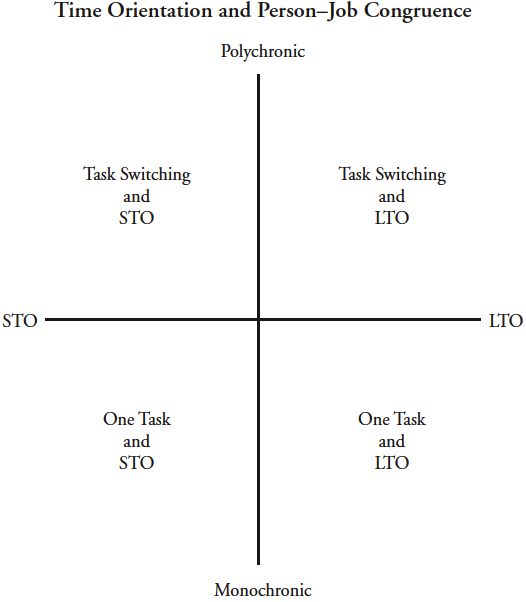 This is NOT another article on time management.  Far from it.  Instead, this is an article on preventing stress in your new job.

New Financial Advisors have enough to tend with during their first few months — licensing, class room training, computer-based training, filling the calendar with initial appointments — it can be overwhelming at times.   In the midst of this there is one important thing to keep in mind.  What is your time orientation?

Researchers Weeks and Fournier (2010) studied how a person’s time orientation contributed to the stress that a person experiences as a sales person.  The picture below says a thousand words.  There are essentially four major types of time orientation.  A person can naturally fall towards a long-term orientation (LTO) or a short-term orientation (STO).  Meaning a person’s thoughts and actions fall somewhere on the spectrum between short-term and long-term.  There is a second measure that a person needs to consider as well — multitasking.  Some people love it.  Others can’t stand it.  One the graphic you will see the terms polychronic (multitasking) and monochronic (one thing at a time).

Time orientation is important to consider because a sales person who is accustomed to taking a long-term approach to sales will not fit well in an environment that demands short-term focus. The same can be said of task orientation. Some roles demand that the individual focus on many things at once. One could consider a person who does not enjoy multitasking as a poor fit for a job that requires such.

We use cookies to offer you a better browsing experience, analyze site traffic, personalize content, and serve targeted advertisements. If you continue to use this site, you consent to our use of cookies.Ok